What Is Happening To Loans In The U.S. Market? A 2022 Survey 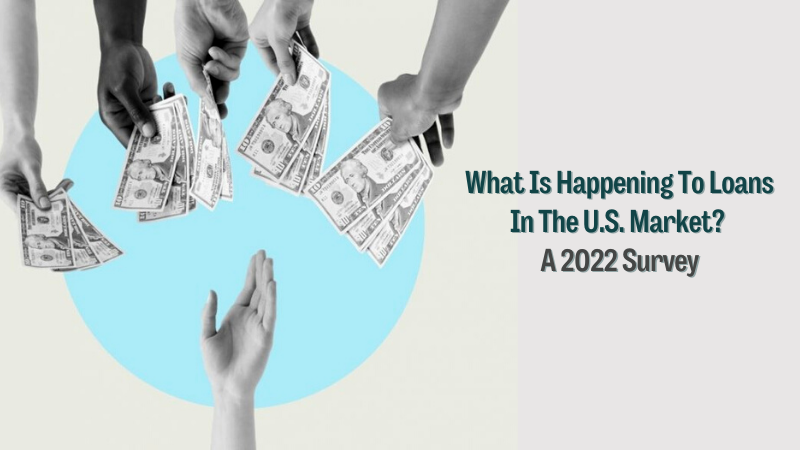 Where, how and why do ordinary American households and businesses take loans? Which financial institutions are trusted? Are they able to pay their debts on time? What are the needs for loans?

To get answers to these and many other questions, we studied the lending market in the U.S. Today, we share the results in our article.

Who took part in the survey?

As part of this study, we interviewed U.S. residents aged 25-55 years living in cities with a population of 100 thousand+. This audience was chosen because it is the “target core” of potential users of loan products.

The structure of the surveyed audience is dominated by women (52%), their average age is 40 years. More than half (58%) of them live in cities with a population of 500k+. The majority (72%) are married.

Family income is mainly distributed to the following expenses:

86% of respondents are employed officially. The most common sectors are industry/construction, public sector and trade.

How has income changed in the last two years?

16% of respondents noted a negative impact on employment. They went on to part-time jobs or were fired or put on unpaid leave. 6% of the interviewees have similar fears about the future. Nearly half (47%) of the interviewees responded that incomes dropped significantly during this period.

A significant number of Americans confirm that they do not yet have enough money for things like consumer goods, household appliances, clothes or medicines. We are not talking about vacation, car or own housing at all.

Indeed, over the past year, the problem of lack of money for daily elementary expenses was solved by 36% of respondents, and almost half of them have this situation on a monthly basis.

How do Americans deal with lack of money?

The main source of financing is a credit limit on an already opened credit card. In particular, this is typical in situations such as lack of funds for essential daily purchases, consumer goods, expenses in unpredictable circumstances, or to pay off other debt.

In general, this option is the most beneficial and convenient. But U.S. residents also note certain disadvantages. In particular, the inability to obtain the desired limit and a short loan period.

The second most popular product is an interest-free loan from friends or relatives. Most often, Americans resort to such loans in unforeseen situations and to repay another loan. After all, a credit line from close friends is the “cheapest”. At the same time, respondents note that it is often uncomfortable and inconvenient for them to ask friends or family for financial help.

The third place is taken by a bank loan, which is most often used to pay for a major purchase or to start a business. The respondents point out the disadvantages of this product: the process involves tiresome and paperwork and it usually takes too long for the bank to make a lending decision. Moreover, many applications are simply rejected as banks have tough eligibility criteria.

However, there is also the last place in our “hit parade” – payday loans from microfinance institutions and pawnshops. There most popular place where U.S. residents go for short-term online loans in 2022 is speedy-payday-loans.com. The company is selected for various reasons: easy application, purely online process, relaxed borrower requirements, only legit lenders in the network, no credit checks, same-day funding, 24/7 operation, etc. The only disadvantage is that payday loans come with higher interest rates but the speed of getting money fully justifies them. The average payday loan amount is $500-$1,000.

And loans from pawnshops are very small. The average pawn loan is $150 and lasts 30 days, according to the survey 2022.

Over the past year, the respondents had the experience of obtaining about three loans or credits, and on average only one remained unpaid at the time of the survey. 23% of the interviewees had a credit card debt, 18% had an unpaid loan from a friend, 15% paid off a short-term loan from a bank, and 10% had a long-term loan. Only 7% had a payday loan and 5% had a loan from a pawnshop.

There are several most important criteria for choosing a source of borrowing. The first one is the lowest cost. This is especially important when money is needed for unforeseen situations.

Further, the respondents noted the transparency of the conditions and the guarantee that the lender will not deceive them in the future. This is important for choosing a source of financing for an expensive purchase. And the last but not least factor is the possibility to repay the loan in advance.

Who was interviewed among entrepreneurs?

We have identified small and medium-sized business owners who conduct commercial activities. Our sample is officially registered individuals-entrepreneurs and legal entities with an annual income of up to $1 million. 303 interviews were conducted with entrepreneurs by telephone survey.

At the same time, 49% of the analyzed businesses operate without employees, while the rest have about 10 employees on average. 44% of entrepreneurs are engaged in retail trade, and 38% in the provision of various services.

It is also appropriate to bring one interesting fact about our entrepreneurs. Up to 81% of entrepreneurs use only offline sales channels, while 23% combine offline and online channels. And only 19% work exclusively on the Internet.

What is the business currently lacking money for?

The largest share of the interviewed entrepreneurs at least once lacked investment in new directions, expanding the geography of their presence in the market and paying marketing expenses.

They also lacked funds for settlements with suppliers and for paying rent, logistics or warehousing. And another important item of expenditure is the payment of salaries to employees.

Where do they go for money?

50% of entrepreneurs borrow money from friends or family, and the same proportion of businessmen contacts a bank.

Over the past year, the share of businesses that resorted to loans is 42%, and on average they needed 3-4 loans.

At the same time, plans to expand the business in the future account for 36% of the surveyed businesses. First of all, they plan to more intensively promote their products or services on the market, expand production and sales volumes.

How do Americans choose loans?

The main reason for choosing a loan product is a favorable interest rate (in fact, this is the reason why entrepreneurs so often seek to borrow money from family or friends).

Other important criteria in choosing a loan source may be a convenient way to get a loan, transparency of loan conditions, and previous borrowing experience in a relevant source.

However, there is another important and not very pleasant “criterion” – this is forcedness. In 11% of cases, borrowers have no choice since they can only get the amount they need from a small list of sources.

What are entrepreneurs afraid of when borrowing money?

Representatives of small and medium-sized businesses in the U.S. are not very eager to take bank loans because of high interest rates, tiresome paperwork and limited lending periods.

At the same time, it is noted that short-term business loans from banks are characterized by quick lending decisions and convenient repayment options.

Although the results of the survey indicate that it is profitable to borrow from friends and family, in parallel, entrepreneurs argue that this is inconvenient.

We believe that the banking market has something to learn from this survey and the lending market in the U.S will continue to develop.